Conservation of the Spectacled Bear in the Bolivian Andes

Susanna Paisley was awarded the 1997 Whitley Award for her work with spectacled bears in the Bolivian Andes. 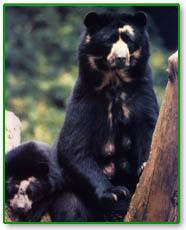 Bolivia is widely considered to be the most critical country for research and conservation of this species. The endangered spectacled bear, Tremarctos ornatus, is the only South American bear. A less confrontational descendant of the giant running bear (the largest mammal carnivore ever to roam the earth), spectacled bears are amongst the least studied of all terrestrial carnivores: little is known of their ecology or complex role in Andean mythology and culture.

Susanna’s project inaugurated research on the eastern flanks of the Apolobamba range northeast of Lake Titicaca, a region estimated to hold one of the richest assemblages of terrestrial biota on earth. Bolivia’s cloud forests, the prime natural habitat for the bears, have been degraded as escalating rural poverty has led to deforestation. Increasingly excluded from their prime habitat, the bears are frequently shot for raiding crops or for apparently killing livestock.

Local trade in bear products has further endangered the species. Bear bile, fat and bones are highly sought after for use in local medicine; internationally, a chemical found in bear bile can command a price many times that of heroin.

Investigating and implementing practical solutions, Susannna’s research into human-bear interaction involved an unusual combination of scientific and social fieldwork. Using radio-telemetry, a technique never before attempted with wild bears of this species, Susanna was able to track and assess the bears’ behavioural ecology and home range size. Bolivian students and scientists are also involved in all phases of the study and the project’s headquarters provide a much-needed field research station for the Bolivian Institute of Ecology.

Susanna’s findings formed the basis of her doctoral degree from the Durrell Institute of Conservation and Ecology of the University of Kent, and have been published in journals as diverse as the Journal of Zoology and World Archaeology. The Bolivian national conservation body and the non-governmental organisations have gone on to use Paisley’s research to develop local education initiatives and further define strategies for the future management and conservation of the species.

In addition to Whitley Award funding, the project was associated with the Zoological Society of London and received support from Paddington (bear) and Company Ltd, the Rufford Foundation and the Wildlife Conservation Society. Susanna is the co-founder of Survival Arts, a social enterprise which uses art and design for species conservation. For more information about her work, visit http://www.survival-arts.org/.

Parabiologists and conservation in the Bolivian Chaco, Bolivia and Paraguay